As a printing company, Toppan has long helped transmit culture from one generation to the next. Now virtual reality can do something similar with physical spaces, reproducing and archiving them with extraordinary precision.

Toppan had already been working on VR for two decades. The company first launched its VR research and development drive in 1997. In Toppan’s case, the context was cultural, rather than gaming-related. The company had already built relationships with Japanese shrines and temples and museums around the world by providing innovative ways of displaying and exploring cultural content, such as digital displays and interactive touch panels. The move into VR was a natural progression, especially since Toppan could leverage its existing printing technologies like color management, color display and high-definition image-handling. 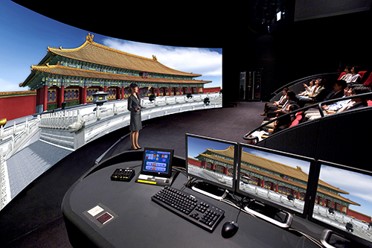 The Palace VR The Forbidden City : The Palace of Emperors
© the Palace Museum/Toppan Printing Co., Ltd.

Toppan VR Theater, a dedicated theater optimized for the presentation and screening of Toppan VR offers a virtual experience of unparalleled presence and immersiveness. It’s the feeling of actually being there.